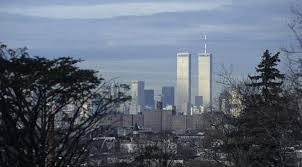 On September 11, 2001, at 8:45 a.m. on a clear Tuesday morning, an American Airlines Boeing 767 loaded with 20,000 gallons of jet fuel crashed into the north tower of the World Trade Center in New York City.

The impact left a gaping, burning hole near the 80th floor of the 110-story skyscraper, instantly killing hundreds of people and trapping hundreds more in higher floors.

As the evacuation of the tower and its twin got underway, television cameras broadcasted live images of what initially appeared to be a freak accident. Then, 18 minutes after the first plane hit, a second Boeing 767—United Airlines Flight 175—appeared out of the sky, turned sharply toward the World Trade Center and sliced into the south tower near the 60th floor.

Windows on the World restaurant